Competition for the Bakken crude by rail trains may change the pattern.

There is an interesting technical report today that shows how a possible Canadian crude new pipeline investment might within three or so years change the pattern of using crude oil trains to reach eastern seaboard US and Canadian refineries.

The report by Sandy Fielden in her informative blog post, “Watching The Defections – How Energy East Competes for Bakken Crude-by-Rail Barrels,” parallels by continued warning to clients that there is always some form of competition that rail freight managers need to consider in their marketing and pricing plans.

Moreover, If the pipeline is completed all the way to the Atlantic Seaboard at Saint John with a plan for a deep water marine port) it will compete with existing crude supplies delivered from North Dakota to the Irving refinery by rail unit trains.

Those mile or so long unit tank trains that worry first responders might then see a diversion of those oil barrels that today reach from North Dakota to the Port of Albany, NY and directly to the refineries in New Jersey and Pennsylvania. here they are transshipped onto barges and shipped up the coast.

The authors provide a map of their pipeline concept in their report available on the web. 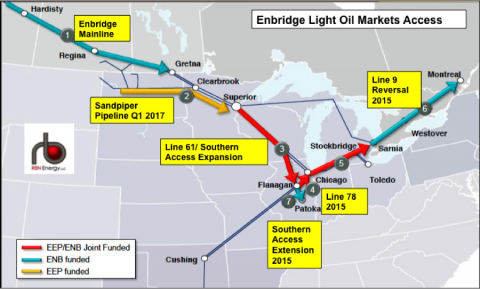 As train shipment prices increase with the replacement of improved but higher capital cost for safety tank cars, how would the pipeline change the commercial logistics decision?

A business decision based on this possible competition could significantly alter the market share today dominated by rail. The authors suggest that crude-by-rail (CBR) movements from North Dakota to East Coast refineries average about 426 Mb/d according to the latest report from the Energy Information Administration – EIA).

“With current Bakken to East Coast rail freight costs running at about $15/Bbl and depending on the Energy East pipeline tariff, the freight cost from Saint John to refineries at Newark (Phillips 66 at Bayway) and in the Philadelphia region would likely be competitive with rail.” Since voyages from Canada to the U.S. do not require more expensive Jones Act vessels (see The Sea and Mr. Jones) the cost of potential shipments to East Coast refineries from Saint John would be much lower (e.g. $1-$2/Bbl) than equivalent rates for Jones Act tankers delivering to the East Coast from the Gulf Coast (~$5/Bbl).

MAYBE the result would be that Energy East could compete not only against CBR barrels into East Coast refineries but also against crude shipped up the East Coast from the Gulf Coast (e.g. from the Eagle Ford or the Permian field sources. Log into this site for the full analysis